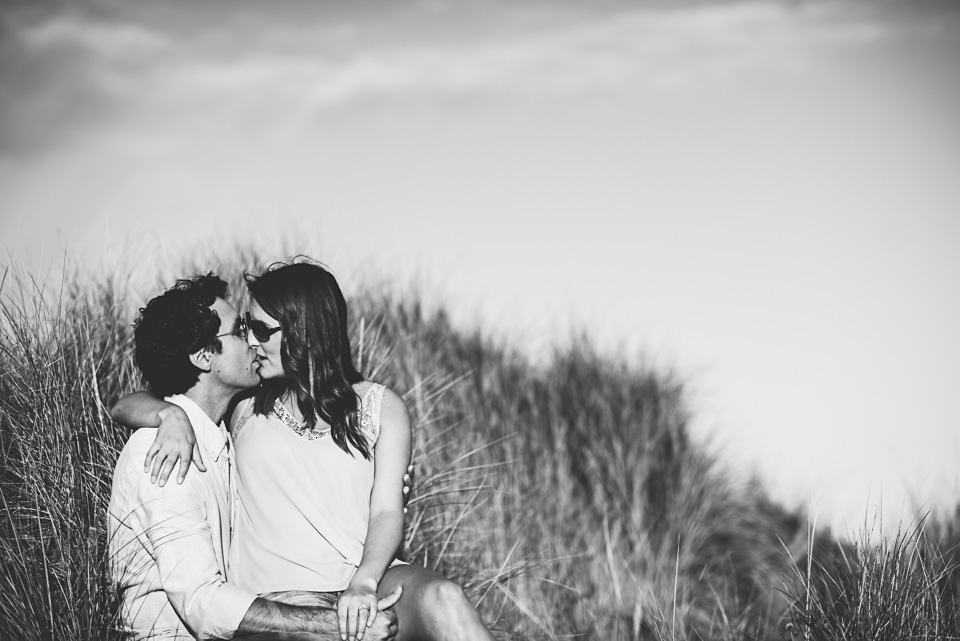 I first met Gemma & Alex as wedding guests last year at a friend of theirs wedding in the depths of Cornwall. Alex was the guy every photographer at a wedding meets most weeks – because Alex was the ‘uncle Bob’ :).

In truth Alex was not a annoyance or obstacle, but rather a distraction as I spent more than a few minutes with him discussing all things photography in a rather geeky way. Fast forward to the present day and Im delighted that this weekend I’m off to the remote parts of North Devon to document Gemma & Alex’s wedding. I know that they profoundly appreciate photography and thats always an added bonus for me.

Here are a few pictures we shot on Sauton Sands together a few weeks ago. – It was a feather lovely evening :) 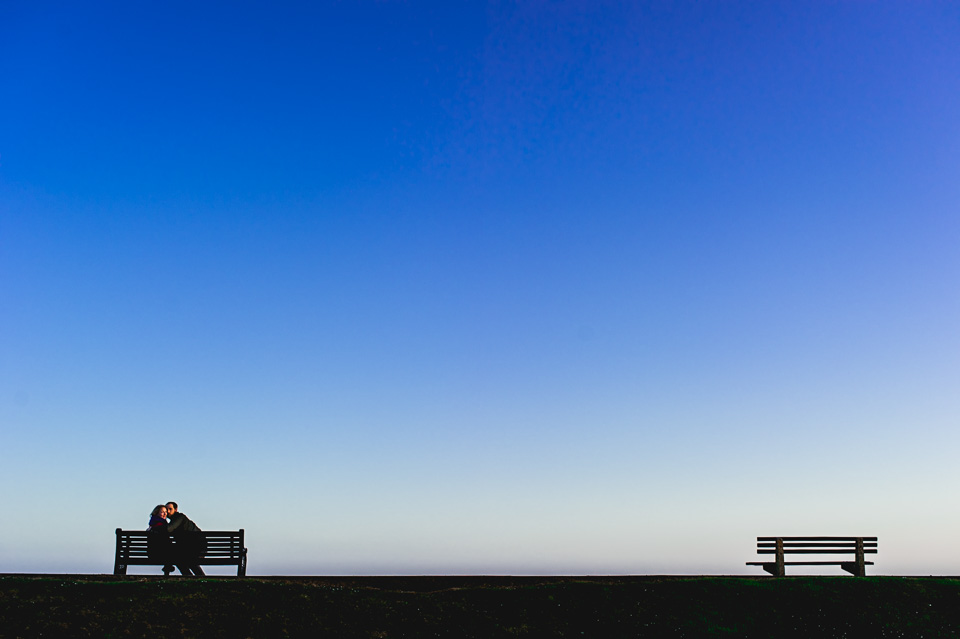 I met this pair for the first time just a few minutes before shooting this first frame of the evening above. After a quick introduction over some takeaway costa coffee from the local spar shop ( classy I know ), we starting to shooting in the golden sunset light around Budleigh Salterton near Exeter.

It was certainly a speedy ‘hello’ for us all, but with some lovely light, beautiful location and this happy pair – it was really hard to go too far wrong.

I’ll be documenting this pairs weekend retreat in a few weeks time and I’m looking forward to getting stuck in and meeting some of their global friends and family. 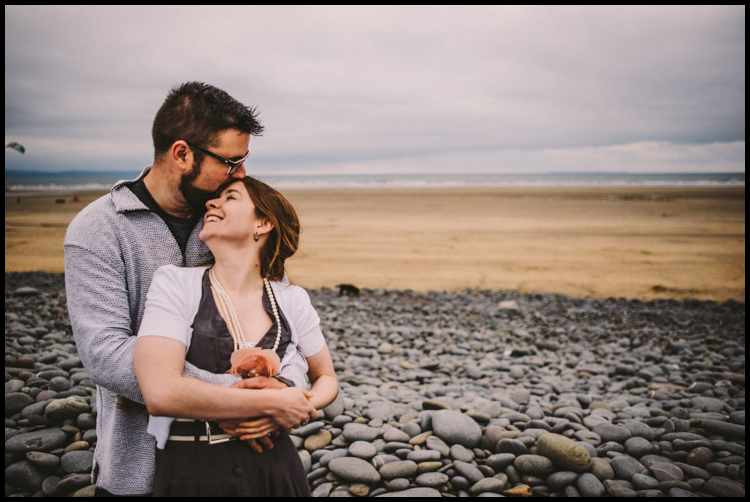 Wow. I like Westward Ho! Beach. This was my first time on this impressive coastal spot in North Devon and despite having been to Saunton Sands (just north of Westward Ho!) I had never ventured to this stretch of coastline until this fun loving pair decided to take me for an ice cream here. :) I love long open stretches like this, one of the reasons I generally like beaches at low tide, but the shear size of beaches like this is incredible. I think only 70 mile beach on Fraser Island in Australia comes trumps above this. Although hopefully someone will prove me wrong one day.

We managed to hit the beach, almost by accident, at low tide to maximise the space and distances we could use in the pictures. However of course this was secondary to just spending some time getting to know the couple for the second time ahead of their wedding in a few weeks time, also in Devon not far from this spot at Westward Ho!

Its amazing being able to witness and be allowed to capture moments of human interaction, although a little prompted, very much in the most organic and natural way possible and sometimes at weddings everything gets heightened in terms of emotions and its a great stage to be albe to document, but on a pre shoot, when there is so little else going on it also amazes me when I get back to the computer the moments I get to capture between two people.

I hope you like this little selection from our 30-40 minutes walking around the beach. :) 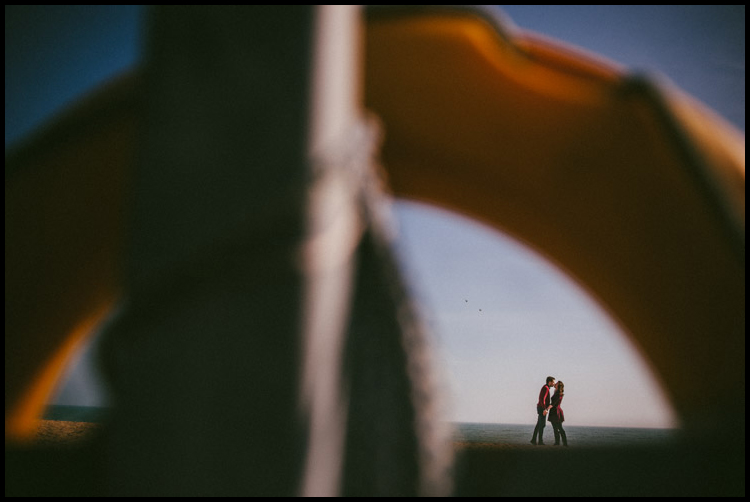 I have been shooting several pre wedding engagement shoots recently, its that time just before the wedding season really gets into full swing and before the wedding’s really start to count up. I have been spending some time with my couples who are getting married in the next couple of months shooting at a wide variety of places around the country to give them some Engagement Shoot style pictures. These pictures are from a pre-wedding shoot last week in East Devon on and around Slapton Sands Beach.

However the ‘Engagement Shoot’ pictures are just one part of the reason I always insist on an Engagement Shoot. Spending some time together, getting to know one-another and building a relationship is really at the core, I also get to learn what peoples likes and dislikes are, what they are comfortable with and create the situation that when the wedding day comes, it wont be the first time I have photographed the couple. The engagement shoot is actual all about the wedding pictures, creating confidence and knowledge so that the wedding is more of an ease for the couple and me. Of course there are always some bonus pictures at the end of the short time spent together and below are a few of them. :)

A little while back I met up with this couple in Totnes to discuss their wedding that was quickly approaching, they both live and work outside the U.K so this was the first time me had to start having a chat in person about the wedding. After we had spoken for a little in Totnes we drove out to Sharpham House near Totnes in Devon to look around what would soon be their wedding venue.

SEE A WEDDING AT SHARPHAM HOUSE PHOTOGRAPHED BY ME HERE.

After having a little look around Sharpham House we had a walk around outside and shot a few pictures of them in the grounds, it was probably only 20-30 minutes, but is well worth the thought and effort to take a few pics before their wedding day. Taking just a few pictures allows the couple the experience the process of having their picture taken, get some pics back and see the results, all before the wedding day itself. It also allows me to gage how the couple are with each other and how much instruction if any (normally) is needed from me. It was lovely to meet this pair and I am very much looking forward to photographing their wedding very soon. Hope you like. :)

Life seems to be pointing me towards Tavistock at the moment, I have been to Tavistock three times in the last two weeks and am off again next weekend to photograph this couples wedding at the Bedford Hotel in Tavistock. Having photographed at Browns Hotel and the Guild Hall, it will make a nice change to photograph at another venue in Tavistock which I have not used before. But thats for another blog. Today I have to share a few frames from a rather wet engagement shoot in and around the park in the centre of Tavistock town. This was a stark contrast to 4 days previously when I was also in Devon but the sun was shining gloriously through on to Saunton Sands Beach. However I honestly do like a little rain, particularly on a Pre Shoot, its a challenge and when you get some heavier rain, which we certainly had, you can use it to your advantage in the pics, as you will see in a couple of the frames below.

Another slight change with this shoot was stepping away from beaches, I normally always suggest a beach for an engagement shoot, I just like being by the sea I guess, coupled with the space available, just normally makes for a nice environment for the event, but i’m always open to suggestions, and parks are also cool, especially like this with plenty of tall tress and leaves. Almost like an autumn feel as apposed to Spring/Summer. :) Looking forward to a pre shoot or two in central London towards the middle of the Summer, so that will be another challenge again, give me urban!

So here are a few frames from my Pre Shoot in Tavistock Park last week, hope you like.